If you haven't heard of the YouTube channel Bunting, it gets my strong recommendation. Bunting creates excellent style imitations of experimental bass music artists and breaks them down with succinct explanations. Notable is his minimal tooling: he uses mostly Ableton Live stock plugins and the free and open source wavetable synth Vital.

His latest tutorial, mimicking the style of the artist Resonant Language, contains several bass sounds with a property he calls "moisture" (timestamp). These bass sounds are created by starting with a low saw wave, boosting the highs, and running the result through Ableton Live's vocoder set on "Modulator" mode. According to the manual, this enables self-vocoding, where the same signal is the modulator and carrier. An abstract view of a vocoder would suggest that this does little or nothing to the saw wave other than change its spectral tilt, but the reality is much more interesting. Hear for yourself an EQ'd saw wave before and after self-vocoding:

A closer inspection of the latter waveform shows why the self-vocoded saw sounds the way it does. Here's a single pitch period: 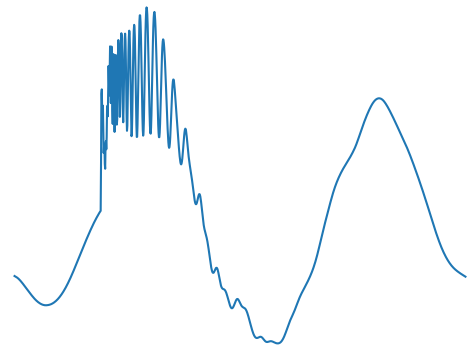 The discontinuity in the saw signal is decorated with a chirp, or a sine wave that rapidly descends in frequency. This little 909 kick drum every pitch period is responsible for the "moisture" sound. Certainly there have been no studies on the psychoacoustics of moisture bass (for lack of a better term), but I suspect that it mimics dispersive behavior, lending a vaguely acoustic sound.

Self-vocoding with exponentially spaced bands is clever, but it isn't the only way to create this effect. One option is to eliminate the vocoding part and use only the exponentially spaced bandpass filters, like an old-school filter bank. This sounds just like self-vocoding but requires fewer bandpass filters to work. In my experiments, I found that putting the resulting signal through nonlinear distortion is necessary to bring out the moisture property.

A more direct approach is to use wavefolding on a curved signal. The slope of the input signal controls the rate that it scrubs through wavefolding function, and thus controls the frequency of the resulting triangle wave. By modulating the slope from high in absolute value down to zero, a triangle wave descending in frequency is created. This is best explained visually: 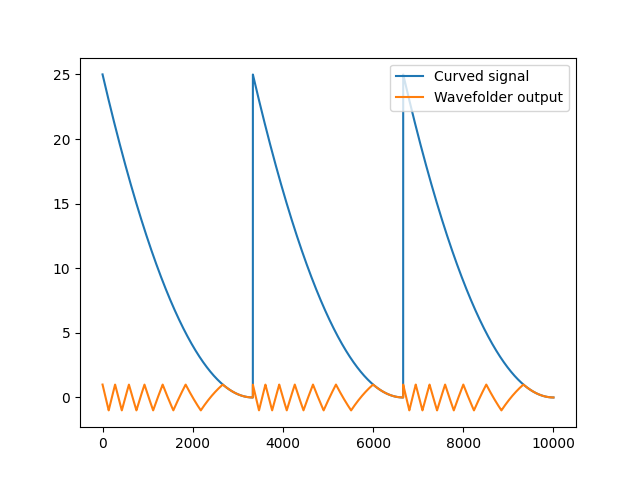 And here's how it sounds: